San Francisco Then & Now: Vigilantes & Smartphones: Hoist with Our Own Petard 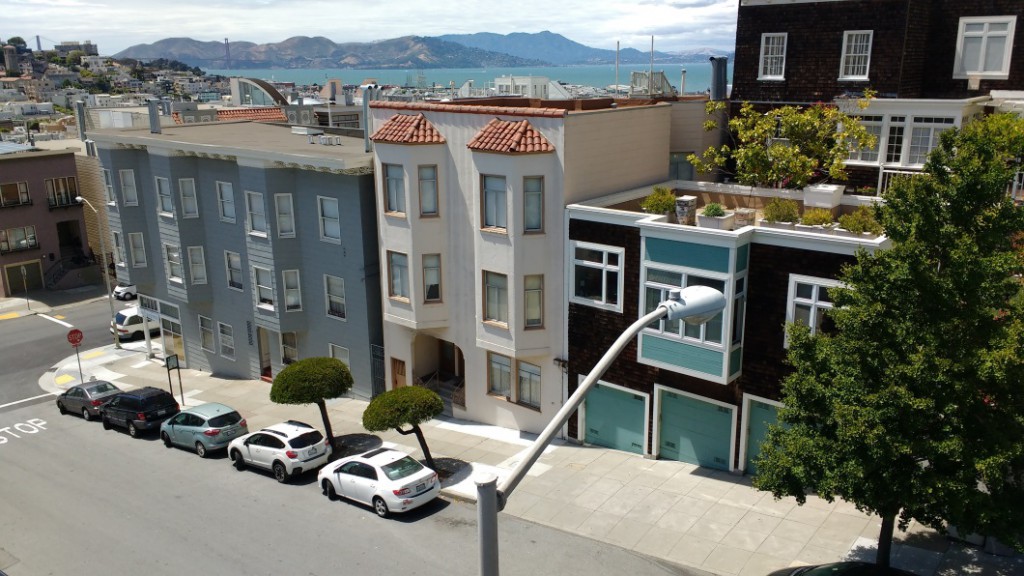 “Hoist with their own petard”: in Shakespeare’s day that didn’t mean hanged, but blown up with their own explosives. Here on the fringes of Silicon Valley, we’re unwittingly paying the price for our addiction to staying connected 24/7. Above, my view now; below, my view as ExteNet/Verizon/City of San Francisco proposes to amend it by installing a Personal Wireless Service Facility outside my window. 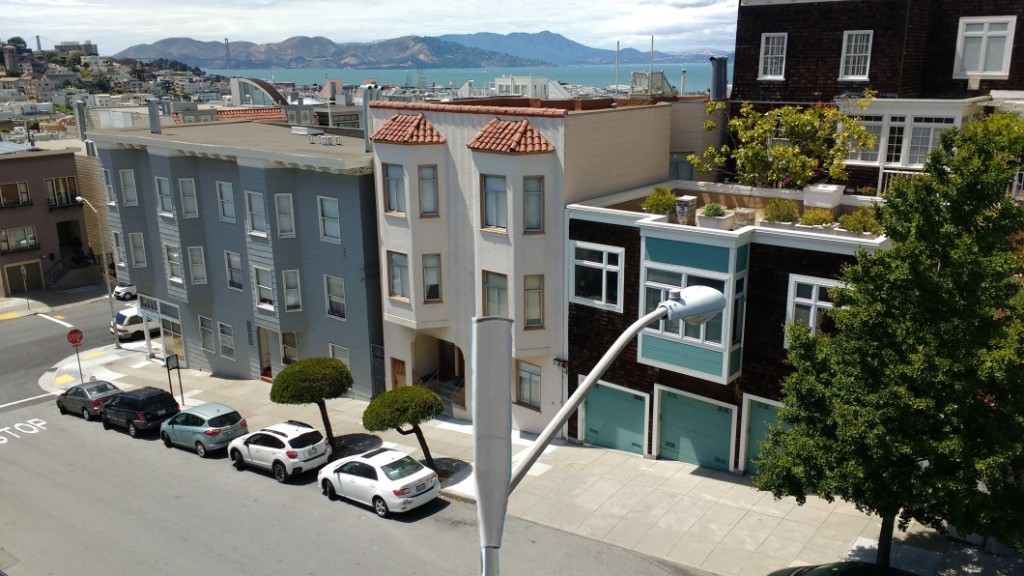 All parties concede this neighborhood already is saturated with wifi/cell service. However, in 1997 the Federal Communications Commission (FCC) made 3 key rules: cities can’t limit communications corporations from expanding coverage and capacity; every provider has the right to install as much as every other provider; and–crucially–since we (=FCC) have no irrefutable evidence that radio-frequency emissions are dangerous to humans except in huge quantities, no one’s allowed to object to any new installation because of health concerns. In these photos, just out of sight to the left are a large rooftop transmitter array owned by AT&T and another owned by T-Mobile. Verizon plans at least one lamppost transmitter for every block in North Beach; and two more companies have proposals in the pipeline. Meanwhile, a new study by the US National Toxicology Program has found that cellphone emissions do in fact cause cancer. But responding to that will take the FCC years.

Back in 1856, the petard of choice was literally explosive. As today’s tech geeks carry their smartphones everywhere, the entrepreneurs of 160 years ago carried guns. In November 1855, a drunk and threatening U.S. Marshal, William Richardson, was fatally shot after he stalked and then attacked gambler Charles Cora. 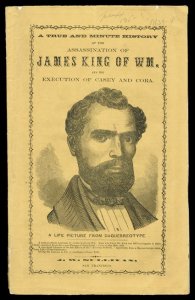 James King of William, editor of the Evening Bulletin, jumped on the incident to expand his crusade against the City’s gamblers and politicians. King urged his readers to take the law in their own hands and drive out the likes of “assassin” Charles Cora and his common-law wife, Belle, the beautiful madam of San Francisco’s finest parlour house.

“Hung be the heavens with black! The money of the gamblers and prostitutes has succeeded . . . The jury cannot agree and are discharged!”

King’s inflammatory views spread as fast as the fires that used to gut the city. Many San Franciscans were exasperated by their government’s failure to do its job. Bulletin sales spiked as King attacked anyone urging calm and patience. He bragged of carrying a pistol and invited his critics to shoot him. One editor who opposed vigilante justice had his office smashed and his newspapers burned in the street.

Supervisor James Casey struck back. His May 11 Sunday Herald noted that while King’s Evening Bulletin urged hanging Richardson’s killer, its editor was pulling strings for his brother Tom to get Richardson’s job. That provoked James King to note in the May 14 Bulletin that Casey had served time in New York’s Sing Sing Prison before stuffing himself through the ballot box in California. 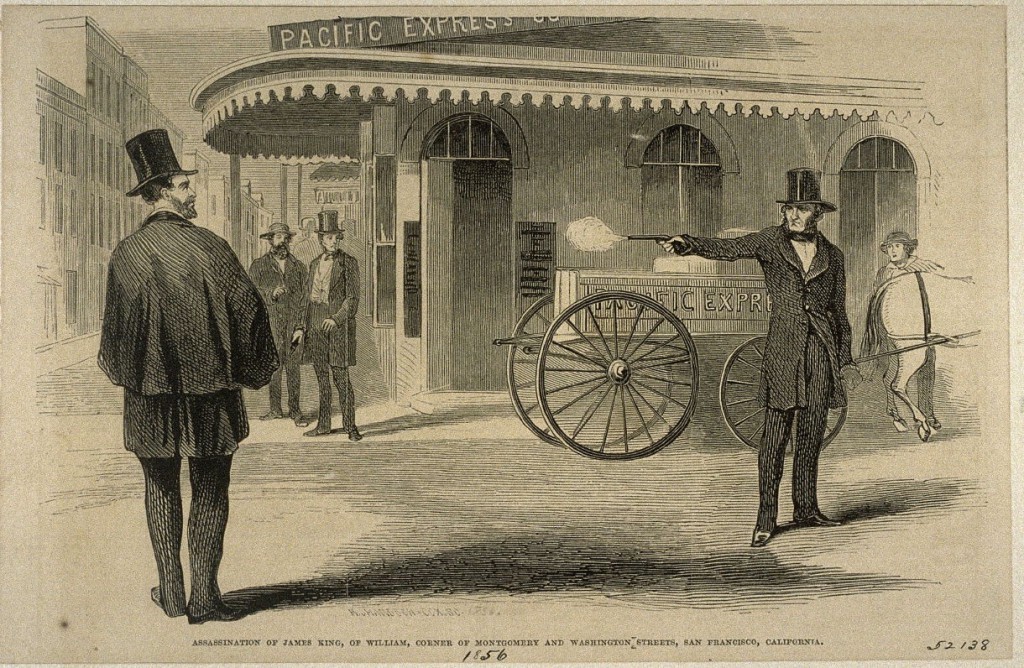 This was not news, but it was an insult. Casey demanded a retraction; King scoffed. An hour later, as King crossed Montgomery Street, Casey confronted him. “Are you armed? Draw!” King ignored him. Casey shot him in the shoulder.

James King of William staggered into the Pacific Express office; later he was moved to the Montgomery Block. James Casey was arrested and stowed by Sheriff David Scannell in the jail on Broadway, where Charles Cora awaited a retrial. Already a mob was forming. Sam Brannan and others began reviving the Vigilance Committee. By morning they’d enlisted 1,500 men.

As the news spread, doctors swarmed to the victim’s side. King’s own physician expected him to recover. But in that crowd of medical help, well-wishers, and cigar smoke, a sponge was pressed into the wound to stop the bleeding, and stayed there until James King of William died of infection on May 20. 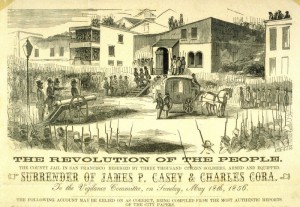 The Vigilantes didn’t wait death to try Casey (and, incidentally, Cora) for murder. On Sunday, May 18, 2,600 of them removed both prisoners from the jail to their Sacramento Street headquarters, Fort Vigilance (AKA Fort Gunnybags). Each defendant would have a kangaroo-court-appointed lawyer and jury; a Guilty verdict would require a 2/3 majority. Casey was condemned easily. Cora wasn’t; but since hanging was the Vigilance Committee’s mandate, they ignored that technicality.

On May 22, a mile-long funeral procession escorted James King of William’s body to Lone Mountain Cemetery. Back at Fort Vigilance, Belle and Charles Cora’s priest married them, then gave the groom last rites. Cora and Casey were hanged at 1 PM. 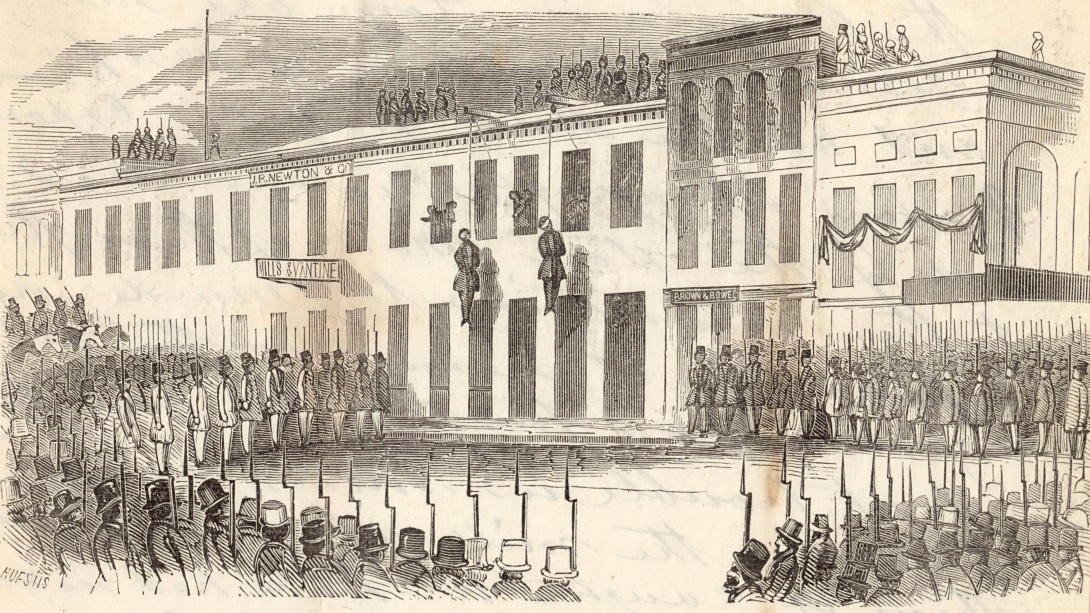