My longtime friend Bob Whipple is a corporate consultant (and ace musician) who specializes in an often overlooked cornerstone of productivity, success, and satisfaction: trust. In his role as “The Trust Ambassador,” Bob makes a point of keeping up with research on his topic. If trust doesn’t sound to you like a topic that calls for much research, take a moment to think about our federal government, or international diplomacy, or how the TSA has changed air travel. Think about closed-circuit TV cameras, e-mail phishing, Internet passwords and retinal scans. Think about this photo, which I recently received from another friend, unfortunately with no source ID. 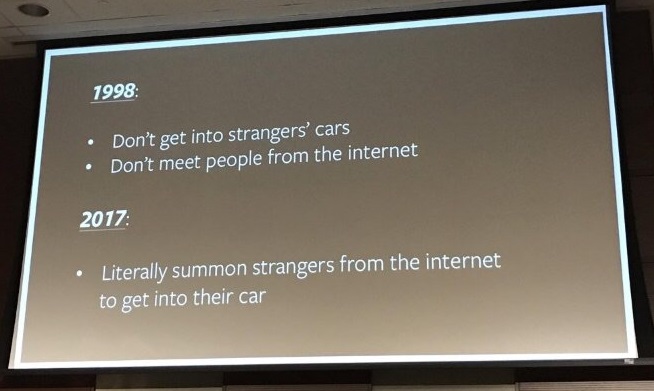 So I’m grateful to experts like Bob, even when he’s the bearer of bad news. His e-mail last week was full of disturbing data and observations. Here are his musings about recent trust research, reprinted by permission, with a link to the findings he cites. (Just one chart is reproduced here, since although the Edelman site enables sharing, the material is copyrighted.)

Every year at the end of January, Richard Edelman puts out his “Trust Barometer” which is a huge study of trust in 28 countries around the world. The actual report is something like 70 pages of data.

This year, as I read the comparison of trust in the different countries, I was hoping an oxygen mask would come down so I could breathe. There are hundreds of interesting and some very frightening statistics as you review the data. I will be sharing the information with my leadership class because trust is the most important part of leadership (IMHO).

[Edelman’s findings] show trust in 28 different countries as measured at the start of 2017 (end of 2016) and the start of 2018 (end of 2017). [If you compare] data from “Informed publics” . . . with the entire population, including uneducated people, . . . you can see the incredible drop in trust that occurred in the year 2017 in the USA. It was by far the greatest decline in any country they have ever measured in the history of Edelman’s work for the past 17 years. (Incidentally, the numbers given are a combination of trust in Business, trust in Government, trust in NGOs, and trust in the Media.) 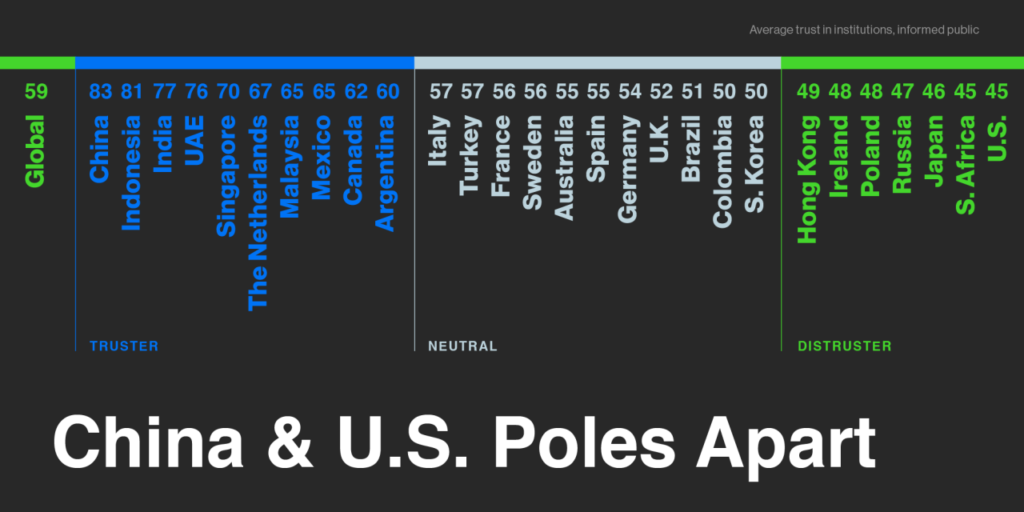 It is interesting to note that while trust declined in all four categories they measure in the USA, in China trust went up in all four categories. Here is the data for the number of percentage points lost or gained in the USA and China for 2017. As you read, keep in mind that changes in trust (up or down) of less than 5 points are routine and not worthy of explanation, but changes above 5 points have a specific cause that should be identified. Changes in the double digits are very rare and indicative of something major going on.

For informed publics, the USA was 6th from the top rated country out of 28 countries at the end of 2016. (The actual survey was taken from October 13 to November 16, 2016.) By the end of 2017 we have fallen to dead last in the world (normally Russia and Poland duke it out for the lowest trust country) and China is the highest rated country in the world for trust.

I am still trying to fathom the magnitude of the changes. I have been studying the Edelman data each year for the past dozen years. Every February I spend about 20 hours drinking in the data and updating my presentations on trust and leadership. This year, within the first 20 minutes it was obvious that we are living in a very different country now than we did in 2016.

So my friends, we still have much work to be done and some interesting times ahead as a nation. My best description to one of my cronies is that it feels like a toboggan ride down a mogul-infested slope blindfolded.

Bob Whipple is CEO of Leadergrow Incorporated, an organization dedicated to development of leaders. He speaks on leadership topics and the development of trust in numerous venues. He also teaches leadership and business classes at graduate universities. As a leadership coach and business consultant, he works with individual clients as well as large organizations such as government agencies, corporations, and The Greater Rochester Chamber of Commerce. A highly successful leader at a Fortune 500 company for over 30 years, Mr. Whipple accomplished revolutionary change while leading a division of over 2000 people through the application of outstanding “people” skills.