We picked Killer Nashville because Pat and I — fellow Sisters in Crime — each had a finished mystery novel which was ready for the quantum jump off the computer screen into the arena of agents, editors, and marketing. Pat’s living in Georgia for the summer, near the Tennessee border; I’d never seen Nashville, and my next book centers on rock-&-roll. Although I’d been up since 3 AM, and this hot afternoon was so damp it drizzled, the lure of live music trumped a nap. So I dropped off my luggage, donned my new cargo shorts and walking sandals, and started over the bridge. 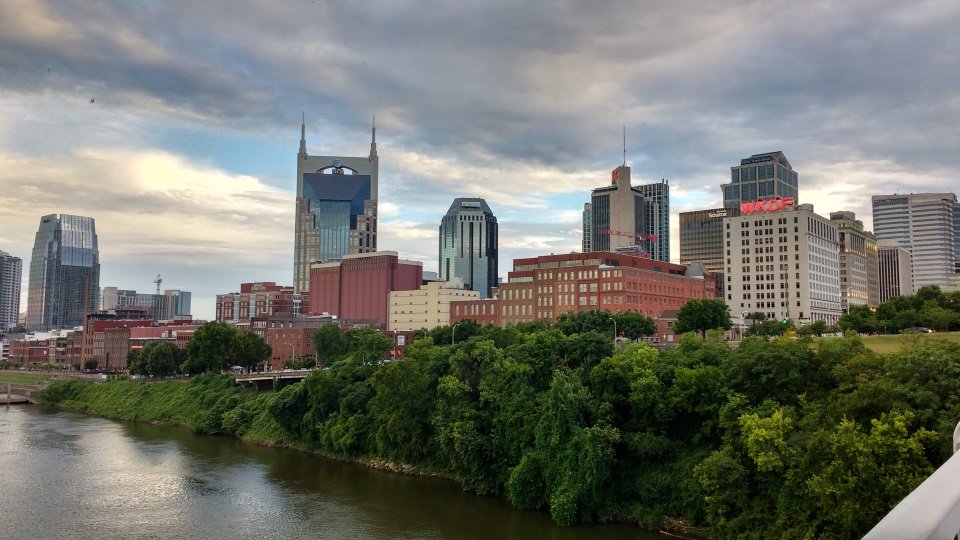 As soon as I caught sight of it across the muddy Cumberland River, Nashville filled me with exhilaration. AT&T might build a Bat-Tower looming over the skyline;  the Disneyesque entertainment center calling itself Opryland might lure tourists out to the suburbs; but my map promised that beyond this mass of green trees and shrieking cicadas lay Music City. 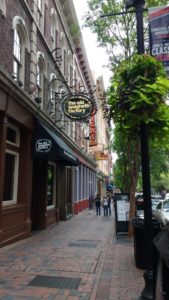 Like New Orleans, Nashville is a moveable feast for music-lovers. Stroll down Second Street and — eureka! There’s BB King’s Blues Lounge, with a skinny hunched old flute and harp player outside serenading passers-by. In the foyer of the George Jones Museum, a band played “I’m proud to be an Okie from Muskogee.” I cut up past the Johnny Cash Museum to Schermerhorn Symphony Center, where I’d heard Lyle Lovett & his Large Band were performing. Wrong night . . . but how wrong can you go, drifting with a cowboy-booted soul-patched whiskey-drinking big-haired babydoll-bloused crowd up and down Broadway? On this corner is Jimmy Buffett’s Margaritaville,

where the kid manning the gift shop confirms he’s got the world’s best job, pasting labels on T-shirts and listening to live music. Over there is a virtuoso fiddler, and next door a lightning-speed banjo picker. I stepped inside the Crossroads bar to listen to an outstanding band, and paused across the street to place the oddly familiar non-Bluegrass tune coming from behind a punk-pompadoured drummer: Tom Petty’s “American Girl.”

But as the night life cranked up, I caught a cab back for some sleep. Tomorrow I’d wander around Nashville in daylight, and then meet Pat to head south for Franklin and our reason for coming here: Killer Nashville.