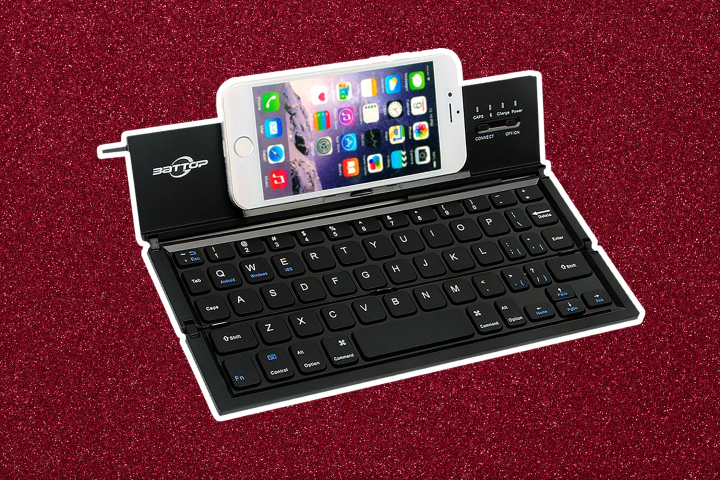 When I worked in an office, my colleagues kept me up to speed on tech, jargon, and TV shows. Since I became a freelancer, I’ve had to rely on magazines in doctors’ offices. Thus I’m a year late discovering the Battop Folding Keyboard. This inspired pocket-size device folds up as small as your phone, and when opened, not only lets you type in semi-comfort with your phone as a screen, but provides a stand for it. I saw it in a “gifts for under $30” spread and fell in love instantly.

There are plenty of others on the market now, naturally, but none that I’ve read about is quite this ingenious.

From the copyright front comes excellent news this week from UK solicitor Jonathan Westwood. Have you ever worried about winding up broke and/or in jail if your novel quotes more than three words from a popular song? Westwood researched this issue for his own work in progress. He concludes: “I don’t believe the use of one line of a lyric will ordinarily be considered any more unfair than extracting 300 words from a book.” Here’s why. And here’s the frosting on the cake:

“…Music publisher Warner/Chappell coerced people into giving it £1million each year to use “Happy Birthday To You” on the basis of a non-existent copyright it claimed to own. Warners had the deepest pockets with which to instruct the nastiest lawyers to bully lesser mortals for 25 years – until documentarian Jen Nelson challenged Warners’ demand that she must pay $1,500 to use the song in a film she was making. After a long legal battle Warners conceded, accepted the song is in the public domain and was forced to pay $14 million to people it had extorted.”

This week’s bad news comes from Amazon. In an e-mail which ironically declares its aim to be “Earth’s Most Customer-Centric Company,” Amazon informs me that, no, it can’t change the order of books shown on my Author Page. Why are three out-of-print 1990s textbooks from second-hand dealers (one with a phony cover) displayed on “my” landing page, but not my latest in-print mystery novel or memoir? Don’t blame Jeff Bezos or CS rep “Daniel B” — blame algorithms:

“…The order of the titles that appear on your bibliography is determined automatically and based on many factors, such as past sales history, current availability, and length of time the items have been listed on our site. It’s not something we are able to manually alter.”

What that says about Amazon’s definition of “customer-centric” — and Amazon’s definitions loom very large for those of us writing and publishing books — I find troubling. I’m hoping to make more headway in Round 2 — at the very least, badger them into showing the real cover for that out-of-print secondhand textbook.